You are here: Home / Daily Joanne / Saying goodbye to a friend of 18 years: Tribute to Mini

This is one of the hardest blog posts I’ve ever written and has been almost two years in the making.

My sweet girl Mini was born on April 16, 1999, in a litter of three miniature poodles. My mother bought her when she was 8 weeks old and gave her to my husband & I as a fifth-year wedding anniversary gift. I was in love from the moment I laid eyes on her. My mother also bought Mini’s sister and named her TJ for Tony (my step-father) and Josephine (my mother). My husband and I lived on the second floor of my mother’s two-family house in Brooklyn and they spent their days having fun and playing with each other. 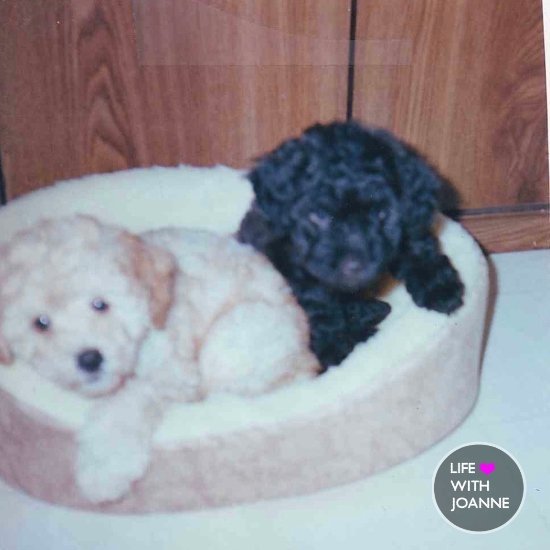 She was always a good dog, doing as we asked and never misbehaving as some dogs do, (like ruining furniture,  chewing shoes, etc). Except for one time when she was just a few months old —

We all went out for the night and didn’t want to leave them alone so TJ came up to my apartment and stayed with Mini. While we were gone, they ripped Mini’s bed to shreds. That’s the one in the photo above. Literally, it was everywhere. We didn’t bother buying a new one and just let her sleep on the rug. One night my husband and I heard her making noise with her tongue as we were getting ready for bed. She was sticking her tongue out and in, almost like she had something in her mouth that she was trying to get out. We put her on the bed and started checking her mouth but found nothing but we kept her in bed with us that night to make sure she was okay. We even made a vet appointment and told him what happened. He didn’t find anything wrong and he suggested it may be a reaction when she’s feeling nervous. That began the start of Mini sleeping in our bed.

I always talked to her and told her how much I loved her and what a good girl she was. She would look up at me with her soulful brown eyes, wagging her tail. All she wanted was to make us happy, and she did.

When they were 2 years old, we all moved from Brooklyn to Florida. Mini & TJ adapted right away and loved all the extra room to run around. My mother ended up buying the house next door to me and our backyards were attached and fenced in and they would run and play in the yard, going from one house to the other for love and treats.

Soon after moving, my husband and I expanded our family by adopting three children, ages 5, 8 and 11. Mini took to them right away and was thrilled to have more humans to love her. 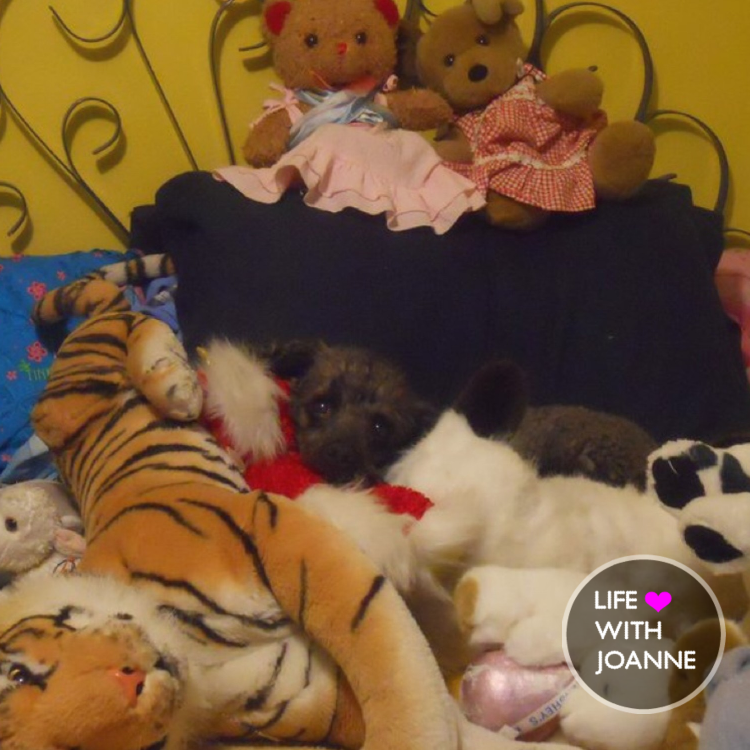 As she got older, her temperament stayed loving and protective. Although she was small, she always alerted us to strange sounds and was the first to see if anything was going on. 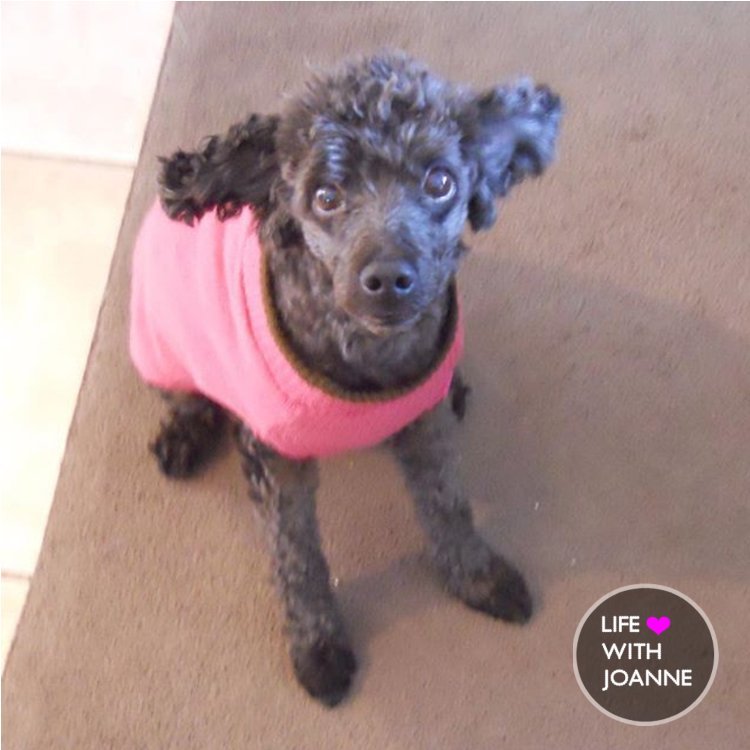 During this time we also had a pet iguana named Buddie. We actually got Buddie about two years before Mini. They didn’t interact much when she was a puppy but after we moved she started to become more interested. At that time Buddie was free roaming in the house and Mini would carefully smell her head or follow her around the house.

One time I was getting out of the shower, opened the bathroom door into the master bedroom and saw this on my bed. Sorry for the blurriness. I was wet, naked and looking for my camera quickly. lol 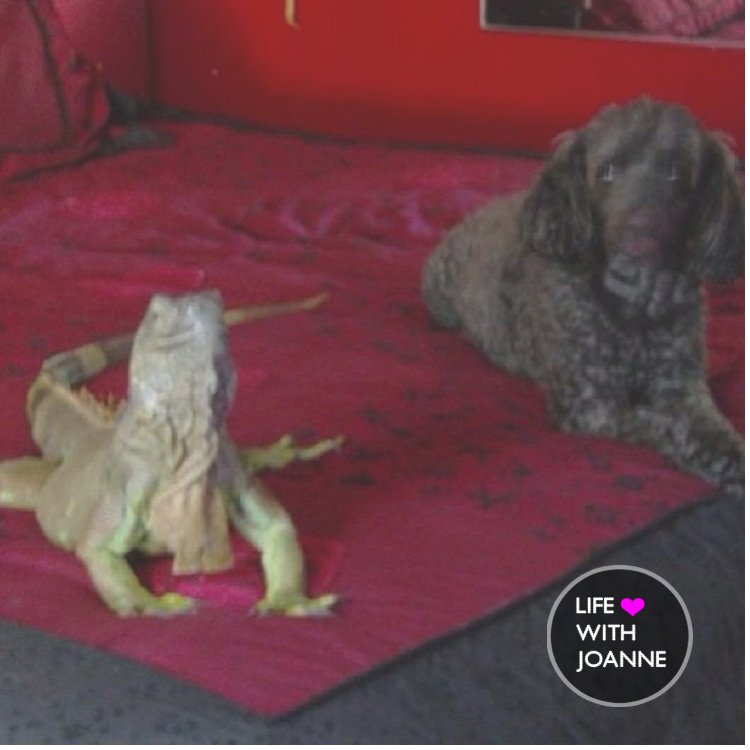 When my mother passed away and TJ came to live with us and they spent the rest of their years together. TJ and Mini were 9 years old at this time. 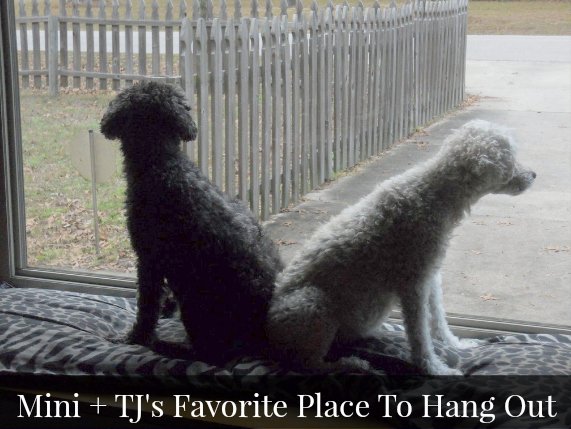 Mini is personally responsible for us “acquiring” three of our four cats. I’ve never had cats. I’ve had dogs in my family from the time I was born. One day when Mini and TJ were 14 years old (yes, 14!), they started going crazy at my back door, which leads to the screen room that houses my pool and my backyard. I let them out and they ran around to the left side of my backyard, where my husband’s shed is. I didn’t think anything of it because they’re always picking up the scent of one animal or another. A few minutes later I saw Mini, walking back towards the house, to the doggy door in the screen room, with something in her mouth. I have to be honest, I panicked. She wasn’t the type to bring home “presents” so I ran to the front of the house where my husband was and told him what happened. He ran to the back and saw that Mini had carried a newborn kitten. She couldn’t get through the doggy door with him in her mouth so she placed him down and stayed with him.

When Billy said it was a kitten, I told him there had to be more and to check near his shed. He found two more kittens, badly hurt, one close to death. He grabbed all three and brought them to our vet, about 15 minutes away.

Sadly, the one that was badly hurt died on the way. The second one, which was a female had also been attacked and needed surgery. The one that Mini rescued was perfectly healthy. My vet asked what we wanted to do with the injured cat. We had no idea because I wasn’t ready to pay for the surgery and we didn’t even know if we wanted to keep them. My vet agreed to do the surgery himself and keep her if she survived, which she did and her name is Clover. 🙂

Shout out to Town & Country Animal Hospital for always being so amazing!

My vet couldn’t tell what kind of animal attacked them but he said that if it wasn’t for my dogs, they would all be dead. He said they looked to be about 9-10 days old and were just starting to open their eyes. We decided to keep the one Mini rescued, and named him after her. His name is Mini-Me. 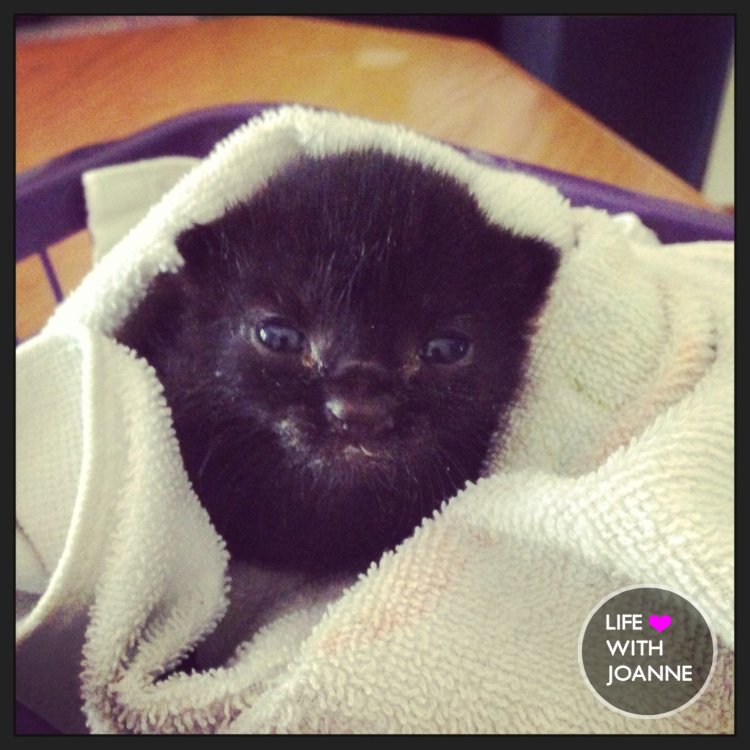 As Mini got older I noticed things that she used to love, like riding in the car didn’t interest her anymore. Probably because it was uncomfortable for her. She couldn’t jump into our bed anymore and for the first time since she was a baby, she had to sleep in a bed on the floor. I think that was a turning point and I saw a slight depression come over her. We made sure to give her extra love and attention during this time.

On November 21, 2014, when they were 15 years old, we had to put TJ to rest. Her health had been declining over the last year. She developed a heart condition and was building up fluid in her lungs. Ironically, that is what my mother suffered from and TJ was actually on one of the same medications as her. I posted about TJ here: The Hardest Part About Being A Pet Owner: In Memory Of TJ.

When Mini was 16, she “acquired” two more cats. We started calling her the cat whisperer. lol It was right around Thanksgiving and I was standing in front of my house, around 9:00 PM with Mini. I saw something very small walking/hopping toward her and at first, I thought it was a baby bunny because all I could see was a little ball of grey fur. As it made it’s way closer to Mini I saw it was a kitten about 2-3 months old. I called my daughter to come and get Mini while I tried to get the kitten but he wouldn’t let us grab him. Instead, he hopped/walked back in the direction he came from, crossing the street and going onto my neighbor’s property where he led us right to —– his sister! We named him Puppy because we joked that he thought he was a dog when he went over to Mini looking for a mommy. We named his sister Callie.

As she got closer to 17, we stopped leaving her home alone. We made sure that either myself, Billy or my daughter Jacqueline was home with her in case she needed us.

On April 20, 2017, she crossed over, in my arms, surrounded by my husband and daughter Jacqueline at the vet she’d been going to since she was two years old. I talked to her as she slipped away, and told her how much we loved her and that she was a good girl. Two things she loved to hear.

I gathered one of some of her toys, one of my mother’s rosaries, her collar and sweater while my husband prepared her final place of rest. My daughter Jacqueline wrote a letter to Mini, from all of us, sharing our feelings and thoughts. 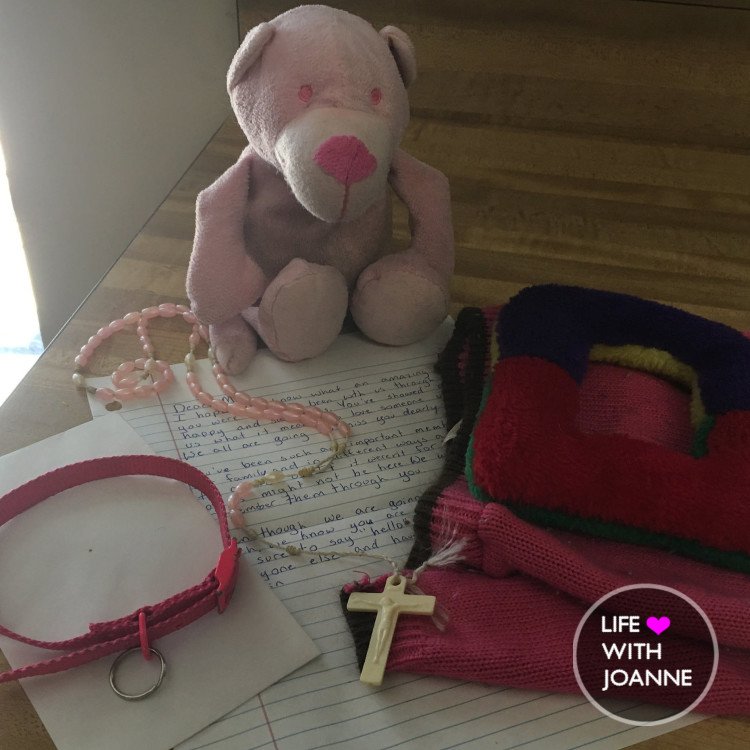 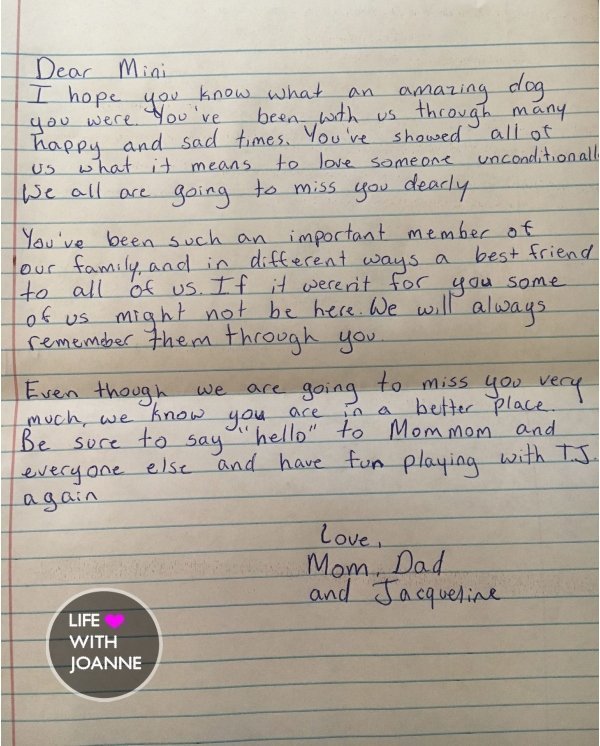 We laid her to rest next to her sister in our backyard. A place they had spent so many years running, playing and of course, rescuing kittens. 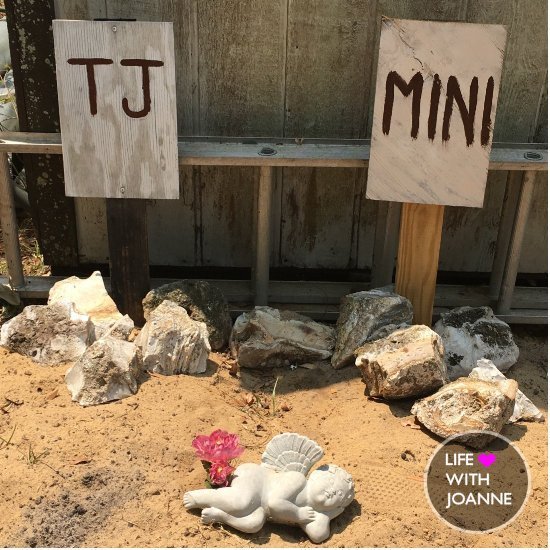 Our vet sent us a sympathy card, which meant so much and really touched our hearts. 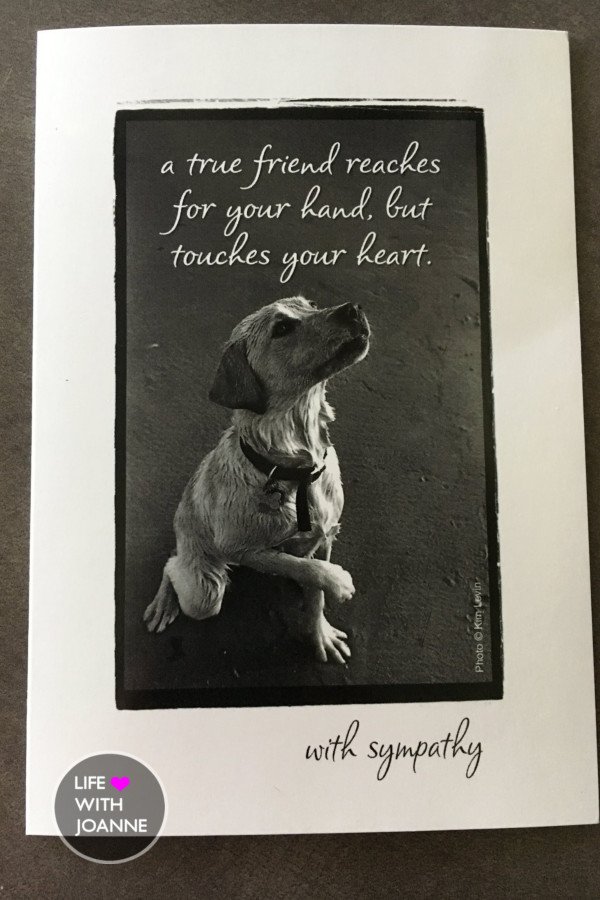 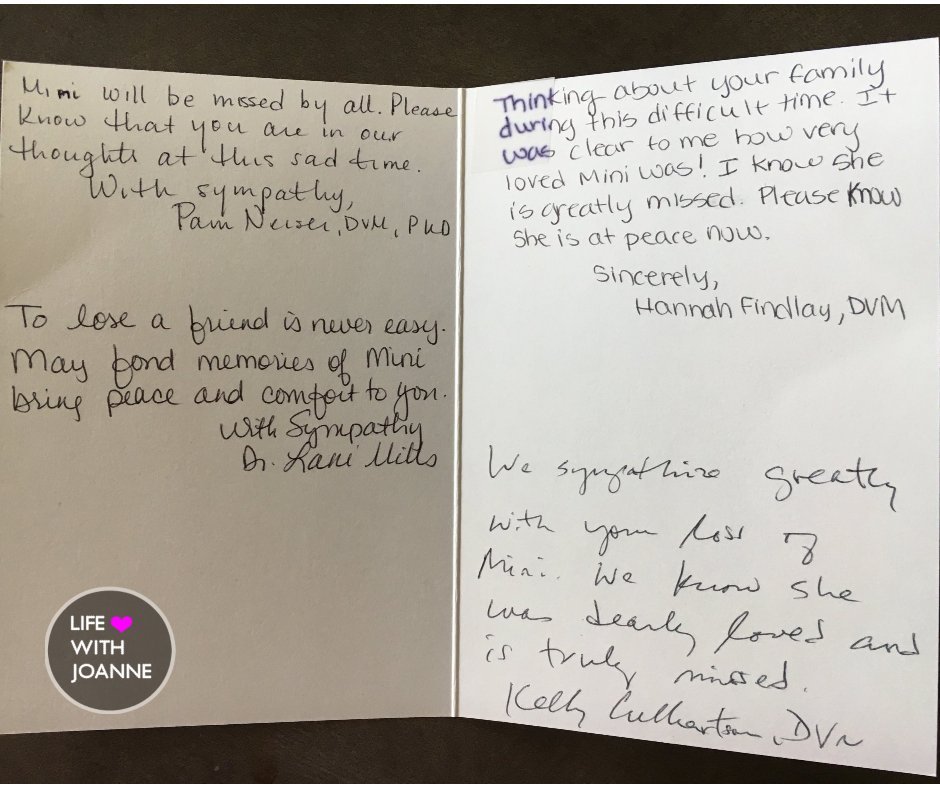 My life-long friend Michele also sent me a sympathy card. I can’t tell you how much these cards helped me. If someone you know loses a pet, consider giving them one to help ease their pain. 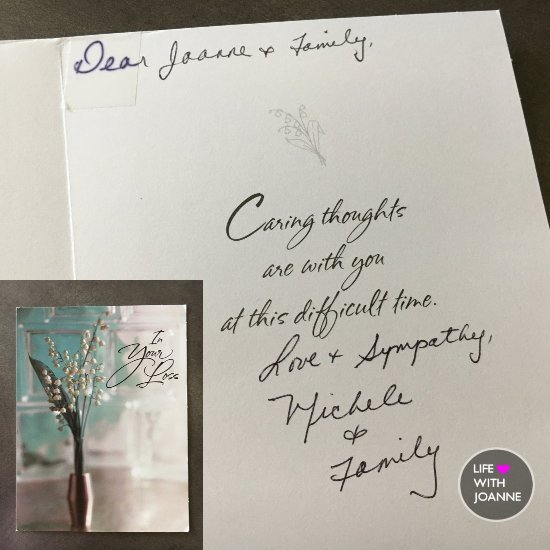 I can’t express in words how much I love her. She meant the world to my family and her love stays with us always.  She knew she was cherished by all of us.